Posted by Chelsea Christian on August 30, 2013
Posted in: Uncategorized.

My shoot with Pixeledge Photo was surprisingly in the same building as my shoot with Jeremy Saffer. (It’s a pretty awesome industrial building that has been renovated to have individually available studios in it. There’s a bunch of artists in there, as well as other people.)
We were also accompanied by a friend of his who is a painter. Unfortunately I don’t have any links or his name (my memory is horrible), but he did say that he would get me some digital copies of the paintings that he did based on our shoot. It’s been a little over a year and I still haven’t seen any, but I haven’t given up hope. 🙂

We started in some lingerie on an antique couch and continued to a steampunk skycaptain look, complete with a crazy “weapon” which I believe (if memory serves me right) was actually a juicer of some type. 😛 We ended the shoot with sort of a digital goddess look with cd pasties and bright makeup. 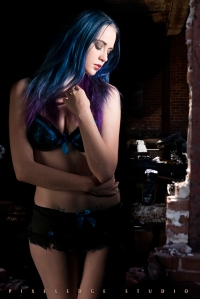