Posted by Chelsea Christian on March 1, 2012
Posted in: Uncategorized. 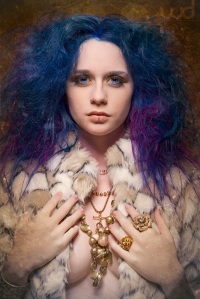 I had such an awesome time working with William David Photo/Tsubasa. He is so much fun to work with. Not only is he an incredibly talented photographer, but he did amazing makeup and hair for the shoot! I really had fun at the shoot, and the pictures that came from it are amazing.

I can’t pick my favorite photo from the shoot at all, lol.

We shot this wonderful series where I was wearing this super soft furry coat, lots of jingly jewellery, fluffy hair, and panty hose. And in post he edited this crazy dragon tattoo onto my body! It kind of moves around from one picture to another. 😛

So many people keep asking me if it’s real. It’s hilarious. I mean, I think it looks amazing and real, but I would have posted about whether or not I had gotten a huge crazy awesome dragon tattoo. I also think it’s funny they ask because it moves. 😛 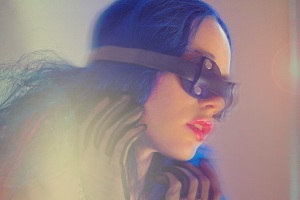 After that set we shot this great fetish set that I got to wear beautiful sheer gloves and thigh high stockings. I also got to wear these amazing black fetish heels.
For the first half of the set I wore this head-harness ball gag and arm restraints that tied my arms behind my back.
For the second half I work this wonderful blindfold and arm and ankle cuffs with a chain I could play with.

The beautiful natural light of his studio made the series one of the best fetish series I think I’ve ever seen (and, no, I’m not just saying that because I’m in the pictures. 😛

For the last set he had these great bright purple panty hose and bright blue rope that matched my hair. We did too different “looks” for this one. He did some amazingly complicated rope bondage ties on me, and added a fan for my hair! I got to wear another pair of really crazy fetish heels, so It was difficult to keep my balance, but I think the shots look great. William, his assistant, and my boyfriend kept watching to catch me if I fell, lol. So many laughs!

When he was editing it he turned them black and white and gave them this 70’s vibe, and I love it! My eyes look crazy in them. 😛

All of these awesome sets were filmed and put together in an amazing video! It’s my first one, and I am so happy with it. It’s more than I expected. Check it out on Vimeo here, or click the image below, or you can check it out right on this site here. 🙂

I also made a bunch of awesome .gifs from the video. 🙂 You can check them out here.

He’s also doing another image that involves 3-d shapes and all kinds of other stuff. I’m so excited to see it when he’s done! 🙂